Want a discount? Become a member!

The Storm and Windstorm safety whistles we manufacture are the loudest in the world, capable of being heard over a half mile away. Utilizing a patented integrated resonance chamber, the sound is focused like a laser beam and blasts an alarm twice as loud as any other made in the world.  This same harmonic chamber also acts to protects it from mud, snow and sand allowing them to even work underwater.

The more compact version of the Storm safety whistle, The Windstorm™ has a slightly lower decibel rating than the Storm, but has the same waterproof capabilities, tremendous power, and sleek design.

Tests show that the Windstorm™ produces a sound which is more easily heard when compared to other popular devices. Tested by an independent research team under the most demanding scientific methods, the Windstorm™ competed head-to-head for loudness against the most popular whistles in the world.

How loud is it?

The Storm Whistle is 118-120 Decibels and can be heard 1/2 mile away in trees and over 1/2 mile away on water. The Windstorm is slightly less.

Do these work under water and through walls or standard windows?

What's the difference between the Storm and Windstorm safety whistle?

The Windstorm is a more compact and slightly less loud version.

There are no reviews yet. 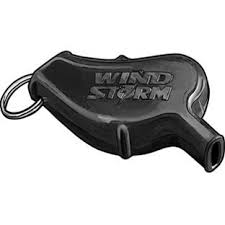